June may bring with it rains and dreary weather, but Century City Mall is here with events and activities that will bring on the fun even on the gloomiest of days. 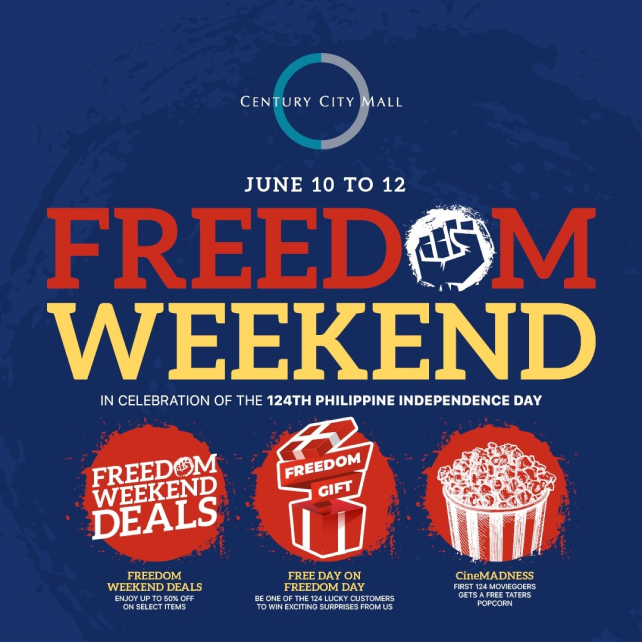 To commemorate the 124th Philippine Independence Day, Century City Mall has surprises in store for the entire weekend. Freedom Weekend Deals abound on June 10 to 12 as shoppers get to enjoy up to 50% OFF on select items offered by select merchants.

Century Cinemas also has an exciting event up its sleeve as CineMADNESS happens on June 10 to 12—the first 124 moviegoers on June 10-12 get FREE Taters popcorn to munch on!

Freedom Day also means freebies as on June 12, a total of 124 lucky customers will win exciting gifts from Century City Mall at the Concierge.

That’s not all! June is also the month where we celebrate the most important men in our lives–our fathers. An exciting DAD-venture awaits at the Al Fresco area of Level 4 as Anytime Fitness will hold an obstacle course to test dads’ strength on June 17-19. And because it’s all about dad on that weekend, shop for dapper dad essentials on offer at select Century City Mall merchants.

Of course, our furry friends get to party too. June 21st is National Dog Party Day, where pets can live it up at the Skyloft.

Rainy months are ahead of us, but it’s always bright and sunny in Century City Mall.