Century Properties Executive Chairman Jose E.B. Antonio (topmost row, center) gives a double thumbs up together with other captains of industry after the official signing of a tripartite agreement among private sector companies, the Philippine government led by vaccine czar Secretary Carlito Galvez, Jr. and AstraZeneca Pharmaceuticals, (Phils.) Inc. Country President Lotis Ramin for the donation of a total of 2.5 million COVID-19 vaccines to the Filipino people. 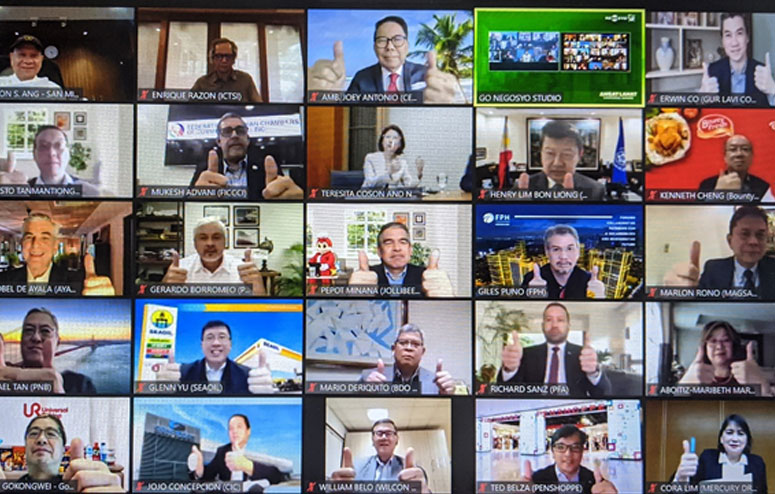 Listed real estate firm Century Properties Group, Inc. (CPG:PM) together with other private sector companies recently signed a tripartite agreement with the Philippine government and the British-Swedish pharmaceutical company AstraZeneca for the advance purchase and donation of a total of 2.5 to 3 million COVID-19 vaccines to the Filipino people.

CPG was represented by its Executive Chairman Jose E.B. Antonio at the signing, which was attended by the vaccine czar Secretary Carlito Galvez, Jr., Presidential Adviser for Entrepreneurship and Go Negosyo founder Joey Concepcion, AstraZeneca Pharamaceuticals (Phils.) Inc. Country President Lotis Ramin with about 40 other captains of industry.

“We at Century Properties Group remain committed in helping our country and the Filipinos fight this pandemic, and help the Philippines to gradually recover from the health and economic impacts of COVID-19. We continue to contribute to this cause and in protecting the welfare of our workforce and their families, which is the very backbone of our economy,” CPG Executive Chairman Antonio said.

The initiative was led by Concepcion to “augment the national government’s separate procurement initiatives (of the vaccine),” as announced in an earlier statement on Thursday. With two doses required of the AstraZeneca vaccine per individual, the consolidated quantity of 2.5 to 3 million vaccines will allow the inoculation of about 1.5 million Filipinos. The Department of Health will handle the deployment of the vaccines, Concepcion said, of which half are allocated for government frontliners. The other half will be allotted for private sector employees.

CPG has earlier supported the construction of a mega testing facility at the Philippine Arena in Bocaue Bulacan to create a northern swabbing center with a minimum capacity of 1,500 tests a day. The company is also strictly implementing a rigid three-stage testing protocol for its employees using rapid, antigen, and RT-PCR swab tests to ensure safety in the workplace, among other health and sanitation measures to prevent the spread of COVID-19. #